A House Without a Cat

Which is strange because just yesterday I was awakened before dawn by the sound of  raucous meowing.  Just yesterday I stroked soft fur covering a little bony body while I spoke gentle words of comfort.  Yesterday, I helped my husband guide an apparently disgruntled creature with sharp claws into a cat carrier.  And even today, I find cat hair on blankets and floors, and there's still that little dirty spot on the rounded corner of the bathroom wall that she liked to rub against.  A food bowl sits empty on the laundry room floor waiting to be filled.

I can't say it was a shock when my husband called from the vet's office yesterday afternoon to say that Adele's kidneys were failing along with a host of other problems and the vet suggested we have her put to sleep.  I had known it was coming.  We both had.  Or perhaps I should say all three of us had.  Adele hadn't been herself lately, jumping up on tables she had never thought to jump on before, following us into rooms but then sitting with her back turned to us like she was in some self-imposed time-out, curling up on the pillow next to the head of my sleeping child instead of staying in her usual spot at the foot of the bed.  My husband joked that she was crossing off items on her bucket list.  Maybe she was.

There are truths in life that we accept intellectually, but when we are actually confronted by those truths we find ourselves emotionally ill-equipped to deal with them.  My husband asked me what I thought we should do.  Neither one of us wanted to be the one to make the decision.  So we talked around it for a few minutes, silently praying that the other one would be brave enough to say what we both knew needed to be said.  In the end, I don't think either one of us said it.  It was just understood.  At the time, I thought it was the right thing to do.  Now I have moments when I'm not so sure.  I didn't want her to suffer, but I wonder if she wouldn't have preferred to be at home.  I know that is what I would want for myself.  To be surrounded by my own things and my own people.  To be where all that really matters lives.  I am comforted by the thought that my husband, the one who brought her into our home all those years ago, was with her at the end.

As painful as all that was, the hardest part was having to tell our children.  They had known Adele all their lives.  She was as much a part of the family as any human relative.  How could we explain that she was no more?  I took them to their martial arts class knowing that when we returned their father would be home and we would have to tell them.  We agreed to one little white lie:  We would tell them that she had died at the veterinarian's office but not that we had had her put to sleep.  Death is understandable, euthanasia a little less so when you are 11 and 7.  We pulled into the driveway and, upon seeing their father's car in the driveway, my older boy, Jared, called out, "Daddy's home!" Then he said, "Adele's home!"  I couldn't speak.  I suspect he knew something was up because he repeated, "Adele's home!"  Still I said nothing.  As we walked up to the front door, my younger son repeated the story of something Adele had done that morning and told me, "She better not do that again!"  No, she won't, I thought, and hoped that he wouldn't feel bad later for having said those words.

There was stunned silence when my husband first told them.  Jared stood stoically until I took him in my arms.  Even then he cried silently.  Jack was confused at first, asking if she was going to be okay, then finally realizing that he was never going to see his cat again.  That's when the tears started.  I told him it was okay, to which he wisely responded that it wasn't.  His grief broke my heart even further.  As I watched him lying on the couch crying, I couldn't help but wonder how he would handle it when the loss was even greater.  Intellectually, he knows death exists.  Emotionally, the experience of losing someone he loves is like an unexpected round kick to the heart.  How will he handle the deaths that lie before him?  How will any of us?

The amazing thing is we will.  Our world will be a little quieter, a little sadder perhaps.  But we will get through it.  We will find reasons to smile and to laugh and to wonder again.

We spent some time last night going through boxes of old photographs, hunting for pictures of Adele.  It turned into a wonderful trip back in time to when our life as a family was just beginning.  We found several pictures of Adele, in many of which she is lying next to Maslow, who died 7 years ago.  And I smiled, thinking that they were back together again, napping peacefully in a spot of sunshine. 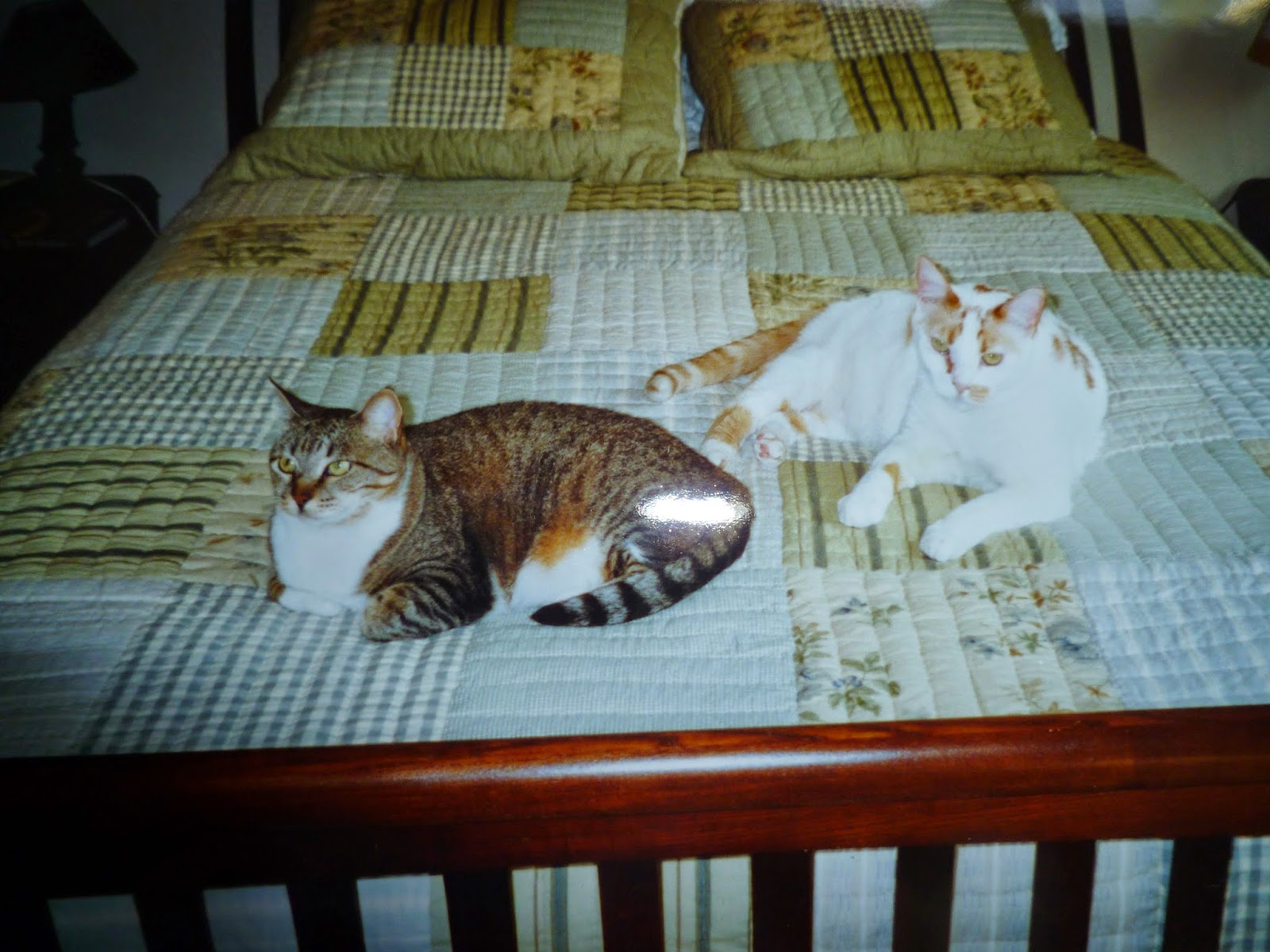