A First Venture into Close Reading

Last week I began reading Falling in Love with Close Reading:  Lessons for Analyzing Texts--and Life, written by Christopher Lehman and Kate Roberts.  The idea of teaching students to read with a lens made a lot of sense and seemed like it would be a manageable approach for helping readers to look more closely at text.  As it happened, I already was planning on having my students look at details in the story we were currently reading, The Talking Cloth by Rhonda Mitchell.  I wanted them to examine the relationship between two of the characters and "reading closely for text evidence" seemed the perfect way to do it.

I became convinced this was the perfect lesson when, the day before I planned to teach it, one of my students suggested the problem in the story involved the relationship between the father and the aunt.  I told my students that we would look at that relationship more closely the next day to determine if this was in fact the problem.

To begin the lesson, I told my students I was curious about the relationship between Amber's father and her aunt and wanted to try to figure out what kind of a relationship they had.  I asked them to help me find details from the story that showed these characters saying or doing something that involved the other.

What I noticed right away was that they had a fairly easy time identifying what the characters said to each other, but they didn't notice the more subtle actions that took place between the two characters.  After pointing out one place where Daddy laughed, the students were able to find other instances where the characters responded to each other with laughter or smiles.  (One student even found a detail I had missed.)

Next, we looked at how the details fit together.  (This is where I should have thought out my chart a little better ahead of time because it got kind of messy with arrows going everywhere.  For some reason, though, the kids thought this was fascinating!)  We looked at all the things the characters said and noticed they were not very nice.  Then we looked at the characters' responses, which were smiles and laughter.  When asked what laughter makes you think of, they responded "happiness," "funny," and "joking."

I was very encouraged at this point, believing that my students were beginning to understand that Daddy and Aunt Phoebe didn't have a problematic relationship but actually had a typical brother-sister relationship where they liked to kid each other.  I bravely (foolishly?) asked my students what new understanding they had.

It was interesting to me that, although they could see the characters were laughing and they connected laughter with happiness, they still only used the dialogue to characterize the relationship between Daddy and Aunt Phoebe, which led them to determine the relationship was "bad."  Even more interesting was thinking of the five previous years I have "taught" this story and never realized how confused my students were by this relationship (if they even thought about it, that is).

In retrospect, I think I should have downplayed the "meanness" of the dialogue and set up my chart so that there was a clear connection between the dialogue and the non-verbal responses of the characters.  Also, we needed to spend more time working through the apparent contradiction between the two.  This part was probably too rushed, in part because it was almost time for recess and in part because I panicked when I realized they didn't know how to resolve that conflict.

Did my students get anything out of the lesson?  I think so.  If nothing else, they saw how an experienced reader doesn't just "know" what's going on but looks to the details of the story to build comprehension.  They learned there were steps to follow and that they could follow them too.  What I learned was that even stories that seem simple can have layers of meaning that students miss.  Students rely on the most obvious of details to formulate their ideas.  Without a focus, there is much they read right over.  Even when the more subtle details are pointed out to them, if these contradict the obvious ones, students don't know what to do with that contradiction and will simply ignore them.

For years I have taught my students to use the text to support their answers.  Students as young as 3rd graders can do this pretty well.  As I learned yesterday, reading a text closely - finding details first and then using them to formulate their ideas - is much more difficult.  Difficult, but not impossible.  Rather than being discouraged, I am encouraged by my experience with this lesson and look forward to seeing my students grow in their ability to analyze the texts they read. 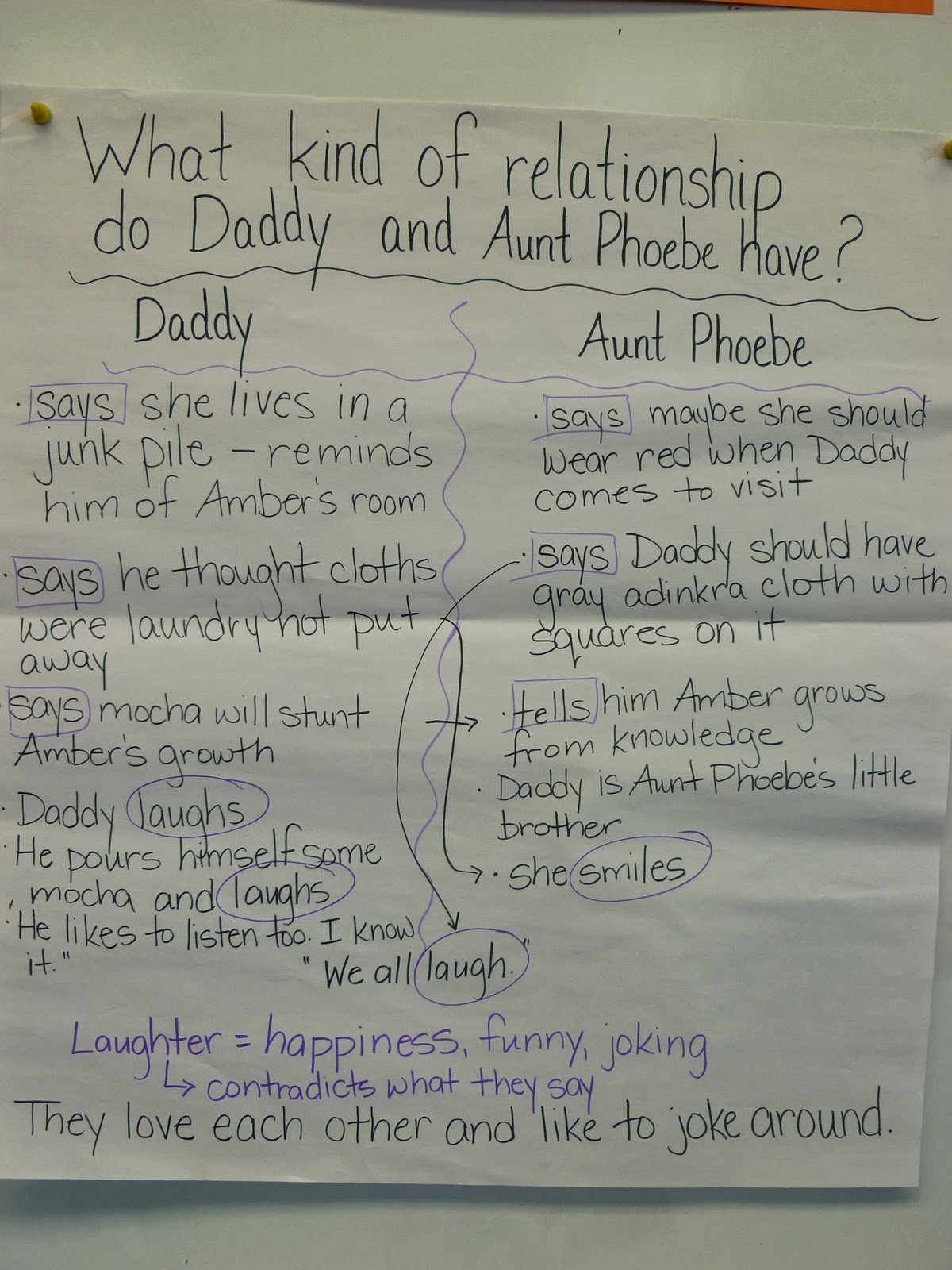