The Story of Penny and Benny

Once upon a time there was a little boy named Jack, who loved cats. He had been seriously heartbroken the day he found out the family cat, Adele, had passed away. He cried and questioned when she was coming back. It saddened his family to see his tears and to have to explain that Adele was never coming home again.

Days passed, months even, but Jack thought about that cat constantly. Every day he asked, when would he get a new cat? He checked out books at the library about how to care for cats and put a picture of Adele in a frame so he could keep it by his bedside.

His mom, who had always had cats growing up, understood his pain. She, too, missed the quiet companionship of her feline friends. Over time, however, she began to realize that with fewer pets there were fewer messes to clean. less fur to vacuum up, and it was a lot easier to plan trips out of town.  And so, even though she missed the cats she had had previously, she realized she was content, for now, to live without them.

His dad, however, didn't really like cats. (Or so he claimed.) Although he wasn't exactly happy when Adele passed on to Cat Heaven, he wasn't sad, either, to no longer have to deal with the meowing at four o'clock in the morning or with the litter box that just never seemed to stay clean. He had no intention of ever owning a cat again.

Then, one day a funny thing happened. No one is quite sure why, but Jack's dad made a deal with him. If Jack could keep his room clean for 30 days, his dad would get him a cat. See, Jack was not a very tidy boy, and his dad was certain that there was no way on Earth that Jack could keep his room clean for an entire month. He was so certain, in fact, that he helped Jack clean up his room to get him started.

Jack, though not the neatest of children, was however a clever boy. Days passed and Jack's room remained clean. Unbeknownst to his dad, he had worked out a plan: he would simply avoid going into his room as much as possible. He even took to sleeping on the floor in other rooms, just so his bed would remain neat and tidy.

Each day he gleefully reminded his dad how many more days until he got his cat.

And that is how Penny and Benny became part of Jack's family. After fulfilling his end of the bargain, there was nothing left for Jack's dad to do but to fulfill his. His dad graciously accepted defeat and Jack's greatest wish was at long last about to be granted.

One day, while Jack was at a birthday party, Jack's mom and brother went to PetSmart where they were hosting cat adoptions. There, cuddled up in a cage together, were brother and sister, Benny and Penny. They were adorable and fluffy and impossible to resist. They were also impossible to separate. So, after the birthday party, Jack's mom and brother took him to PetSmart and surprised him with not one, but two kittens to call his own.

Now, Jack's mom realized very quickly how much she had really missed having cats in the house. Yes, these two were full of energy and mischief and caused way more damage than she was happy about, especially to the leather couch they had just recently purchased. Yet, when they cuddled up and purred those giant purrs that were ten sizes bigger than their bodies, she knew that they had made the right decision.

And Jack's dad?  How did he feel about these new fur babies? Well, he might not admit it, but he, too, fell in love with those cats. And it has become very clear that the feeling is mutual. 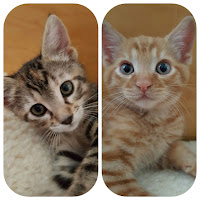 Email ThisBlogThis!Share to TwitterShare to FacebookShare to Pinterest
Labels: #sol17